These Chickpea and Spinach Stuffed Peppers are perfect for bringing together a weekly meal prep in a way that breaks with routine – in a really delicious way. Plus, they’re incredibly easy to make.

These Spinach and Chickpea Stuffed Peppers start with onions, spinach, and chickpeas cooking down in a pan. Then, we add in some Caramelized Onion Vegan Cream Cheese (store-bought will work, too) and use that creamy combination to stuff our peppers to the brim.

Easy Vegan Parmesan Cheese tops off these easy stuffed peppers. Just cover and bake for 20 minutes and dinner is served. If you love spice, a drizzle of hot sauce over top before serving is perfect.

Measuring vegetables like spinach can be more of an art than a science. I like these large glass measuring bowls. They have the measurements etched into the glass so I can easily see how much I have of anything. They’re really handy, especially for leafy greens.

Spinach loses most of its volume when cooked. So even though it looks like your pan is overflowing at first, it won’t last long. Once it has cooked down for a few minutes, add in the vegan cream cheese.

I loved Caramelized Onion Vegan Cream Cheese (below) for this dish. I meal prep it ahead for the week and use it for everything from morning Vegan Bagels to a creamy dip for tortilla chips and a mayo substitute. It’s a tofu base too, so it’s protein-packed and lower in calories than full-fledged cashew dips. Store-bought cream cheese will work too though, especially when you’re tight on time.

Cut your peppers in half first, and then clean them out. Afterward, bring a pot of water to a boil and drop the peppers in for 3 minutes. This will make them oh so tender and juicy after they’re stuffed and baked.

I’m going to leave the link to the recipe for Vegan Parm here. But it’s honestly so easy, that I’m also going to write it out so that you don’t have to click away to get it. Just mix these 4 ingredients together in a bowl, and you’ll have the perfect amount of Vegan Parmesan Cheese to top your stuffed peppers.

These Chickpea & Spinach Stuffed Peppers are

If you make this recipe, let us know how it went in the comments below, or rate us and tag a picture on Instagram #plantednoshery. We love to see your creations – Enjoy! 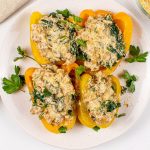 Vegan Parm link is here.  It takes only 4 everyday ingredients and 2 minutes to mix up! Vegan Caramelized Onion Cream Cheese is here.  It’s best to have this on hand before, but it will work just fine if you make it at the same time, too! 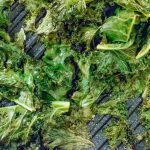 Roasted Kale is lemony, salty, crunchy on the 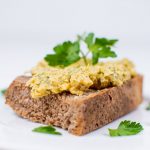 I LOVED egg salad when I was a kid. It was easy, 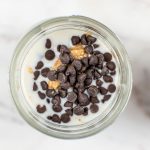 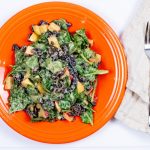 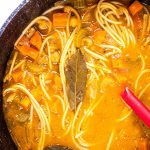 It's soup season around here. We're in the middle 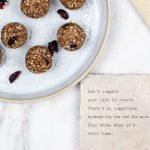 These Coconut Cranberry Energy Balls are 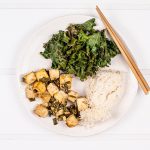 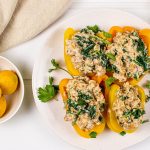 These Chickpea and Spinach Stuffed Peppers are